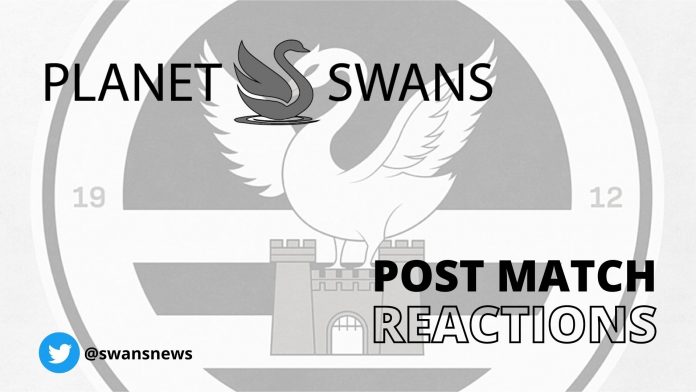 Martin’s bizarre comments only add to the concerns

Russell Martin was clearly ruffled after the humbling 3-0 defeat at home to Blackburn Rovers and faced more questions about his team’s rather frustrating style of play.

Indeed, the Swans boss said that some comments had come from the Blackburn bench during the game which saw him state that “everyone out of Swansea hates it because they’re desperate to stop it and beat it.”

Well Russell, it certainly isn’t hard to beat. Nor is this club a platform for you to design your project around – a project that despite near enough three seasons in the making is yet to show anything other than mid-table mediocrity.

“The way we play isn’t always going to please everyone,” Martin told the BBC.

“I think pretty much everyone out of Swansea hates it because they’re desperate to stop it and beat it.

“Even a few comments from their bench towards it tells me the mentality towards it, because we dare to try and control things and pass the ball. That’s their prerogative.

“Yeah (the criticism is because of Swansea’s style), or an opinion of us as people which really doesn’t bother me because they don’t know me one bit.

“But it’s what you get when you play a certain way, a certain style of football here in the Championship.

“It’s not a problem. We have to make sure we are successful.”

That all sounds a little bit concerning.

You could say 3-0 flattered Blackburn but the disjointed and poor performance from the Swans left fans feeling more than a little concerned at what had unfolded before them.

Indeed after all the talk last season about the lack of pre-season and the requirement for further additions, it would be simple to expect that this season would be an improvement and we’d see more of an identity to the type of football that Martin is trying to implement.

But yet again it came crashing down to earth with a bang to make it eight games without a win – a run which whilst extends back to last season has seen 3 goals conceded to Bournemouth, 4 to Reading, 5 to Nottingham Forest and now 3 at home to Blackburn.

Where on earth do we go from here?

Perhaps the poorest performance under Russell Martin amongst many other contenders came on Saturday as Blackburn Rovers arrived in South Wales and had an...
Read more
First Team

Blackburn continue to embarrass Martin and his masterplan

Blackburn Rovers have continued to rub salt into the wounds after yesterday's humiliation at the Swansea.com Stadium with a number of Twitter posts targeting...
Read more

Perhaps the poorest performance under Russell Martin amongst many other contenders came on Saturday as Blackburn Rovers arrived in South Wales and had an...
Read more