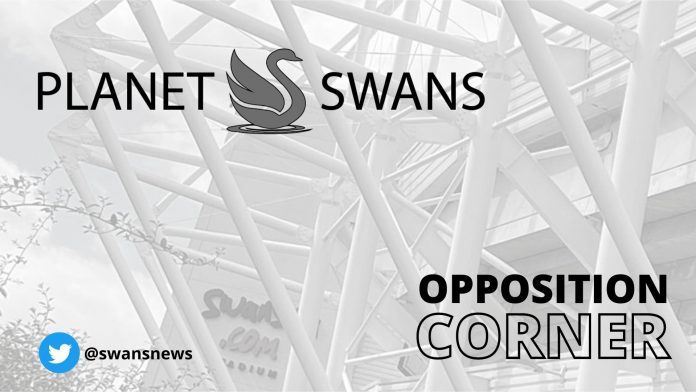 “I have seen more entertaining things come out of GBNews” – a view on the Swans?

It is traditionally the start of the season when various fans from various clubs start looking around the division against all their upcoming opponents to give a view on the chances of each of those teams.

It has been seen also many times over the years that some of those websites come to us for an opinion on the Swans which we happily give especially those opponent sites that we have worked with over many years.

One of those sites is Loft for Words, an exceptionally strong QPR site that we have had close relationships with since the very early days of this website when it worked on the Rivals network under the JackArmy.net guise.

So it was no real surprise that Clive, who runs the site, came to us last month to ask for some views on the Swans this season which we happily shared with him ahead of their own preview of the Swans.

I think it is fair to say that having read the finished preview (available here) that Clive is very much not a fan of the Russell Martin ‘process’ and makes you wonder if his view is typical of how the opposition fans see the Swans style of play.

From the opening words of bemoaning 180 minutes of his life that he will never get back he moves into thinking of better things he could do with that time like ‘wallpapering a downstairs bathroom’ or ‘seeing how many times I can bounce a ball on the floor in 90 minutes and then trying to beat that record’ – certainly not someone who would want to watch us 46 times in a season anyway.

There are parts of the preview that are very easy to agree with and more than enough to raise a smile in terms of the way it is written and the viewpoint that has been taken.   Of course we all look back on last season not with memories of two games against QPR as Clive has to but some of the better performances stick in the memories (what you say Cardiff fans?) but there was plenty were you can resonate to the viewpoint of a QPR fan who has seen us play many times over the years.

“They spent the final game of the season, almost in its entirety, trying and failing to execute a goal kick where the keeper played a one-two with a wide centre back and picked the return up on the edge of the box. The keeper, Alex (he means Andy) Fisher, who had presumably followed Martin from MK Dons specifically because he can do this sort of thing, palpably could not do this sort of thing.”

This was just another view of the games that was seen although it should easily be remembered that the last game of last season was a dead a rubber as you will ever see when there are dead rubbers around.

“I stand there watching this thinking… is it just me? Analytics accounts creaming their kegs, people falling over themselves to nosh this all off, £8m paid for central midfielder Flynn Downes, and yet there they were, fifteenth in the league,” one of Clive’s closing comments sums it up and nicely positions the challenge that is ahead of Russell Martin and his side this season.

Clive has it right.   The analytic accounts love it, the stats machines go into overdrive and the purists tell you all about “the Swansea way” and the high passing stats pretty much unrivalled across all the top divisions in Europe.   But 15th in the league with brilliant stats would be swapped by pretty much everyone for 5th place and a tenth of the stats.  That’s football and why the opposition will see us often as Clive does in his preview.

The question that many have this season is what will previews like this look like at the end of the season when the dust settles on the league season ahead.   Will the Clives of this world be seen as a visionary who can see that the process was nothing more than something new that failed or “a Tony Pulis acolyte who thinks Sam Allardyce would have had the Dortmund job if he’d had a foreign name” (his words)