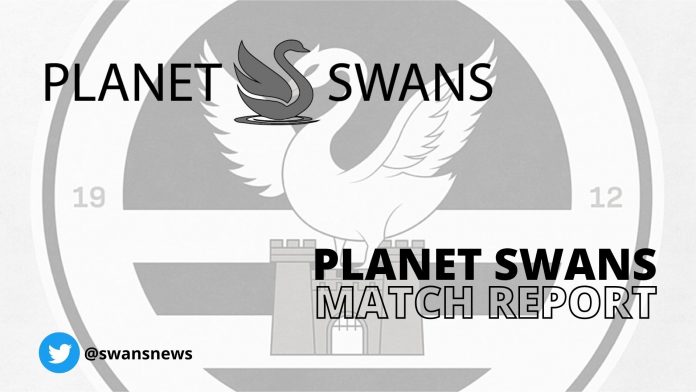 It’s been a long hard season; one which has seen defensive mistakes aplenty, inconsistent performances and scarcely believable decision making and all that was seen in a dour 1-0 defeat to QPR on the final day of the campaign.

Andre Gray tapped home towards the end of a tepid game which had all the hallmarks of a dead rubber final day for both sides with the Swans ending the season on a six game winless run.

It seems a long time ago that Russell Martin’s team won handsomely at Cardiff City and the mini run that followed and the Swans manager now faces a pivotal summer after a wretched few performances to bring the season to an end.

We are often told that the mistakes will be learned from previous defeats but very little seems to be changing as Ilias Chair capitalised on some terrible defending from a ball over the top to pass to an unmarked Gray to score the only goal.

One would also expect team changes after a defeat like that at Nottingham Forest and with nothing to play for but nothing was doing and the same eleven started against QPR.

This can be kept to a minimum; the Swans started pretty poorly and looked to already be on the beach with very few looking like giving the full effort. Probably wanting to avoid injury before their trips to Dubai etc…

QPR probably had the better chances in a miserable first period although you’d forgive a weaker performance by the away side having announced that Mark Warburton would be leaving this summer.

But they defied that thought allowing the Swans little room and pressing at every opportunity leaving Andy Fisher playing pass and go with Kyle Naughton at the back. I’m not sure why and neither did the majority of the fans.

The noises of discontent were certainly louder today although in a couple of rare bright sparks Cameron Congreve did a nice sidestep inside his marker on the right side of the penalty area before his shot was beaten away by Rangers goalkeeper Dieng.

A slight bit of controversy arrived when Christie fired an effort at goal which was only palmed away to Hannes Wolf who had an easy finish before the offside flag was raised.

It looked questionable on first viewing and evenmoreso on the replays but nothing was doing and it remained 0-0 – there weren’t too many grumbles either with little riding on this game except for the hope of a top 12 finish.

QPR’s chances were generally coming from Swansea’s own mistakes or weakness when pressed and Ilias Chair was proving a regular danger down the right – the hitman firing wide when well placed with Fisher scrambling.

Second half arrived and two substitutions were made shortly after the interval, the quiet Joel Piroe (surely for the last time bar a few friendly appearances if he’s not an injury risk) and Congreve made way for Jamie Paterson and Olivier Ntcham.

Piroe and Christie had the two best efforts of the half well saved by Dieng in what had fast become an end of season kick-about with the players ready to board their flights come the evening. I’d imagine quite a few won’t be back.

If anything summed up the season it would be the quick free kick which freed Chair down the left allowing an easy pass to Gray to slide home for his 10th goal of the season and ultimately the final goal of the campaign at the Swansea.com Stadium.

I didn’t stay around to witness the lap of honour. There isn’t really much to celebrate. It’s been at times great but in equal parts as difficult to watch as Swansea City has been in many a year.

We’ve seen it all, been beaten by five goals home and away, conceded huge goals, scored some fantastic goals and won some good games – notably the two Cardiff results.

But boy I’m glad it’s over and we all need the rest. Can we take it all again next year?

Ask me in July…