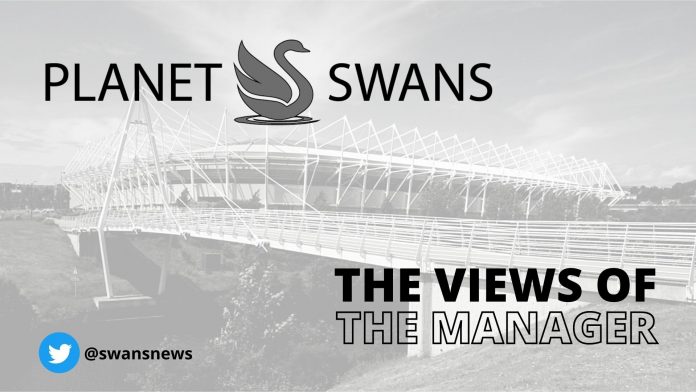 Russell Martin believed that the loss of Joel Latibeaudiere to injury in the final day loss to QPR was pivotal, meaning Flynn Downes had to fill in as a make shift right sided centre half.

Latibeaudiere was forced off midway through the second half after Martin had already made two substitutions with Korey Smith taking his place.

And Martin was aware that people may question why the likes of Ryan Bennett, Finley Burns and Nathanael Ogbeta weren’t included in the matchday squad but his response was clear – those on the bench deserved to be there.

Bennett is likely to be on the way out this summer – providing an agreement can be reached – whilst it seems inconceivable that Burns would return for an extension of his current loan from Manchester City.

It’s not the first time the Swans have been stung by a lack of defensive reinforcements with the game against Bournemouth a key example when Ben Cabango was forced off and again Smith was the chosen susbtitute.

“I liked us in the second half, we had chances to take something from the game. We should have scored a couple of goals, but we made bad decisions in the final third,” added Martin.

“We got on top and dominated but the goal we concede was so basic and it was because we had to move one of our best midfielders into a different position.

“If Joel (Latibeaudiere) stays on that goal does not happen, but it’s due to the lack of depth. Without that we do not concede that goal.

“But that lack of depth has probably been the story of the season for us.”

Martin wasn’t as happy with the first half performance in a disjointed team display from start to finish: “In the first half we were too slow and laboured, there was not enough intensity.

“A lot comes into that, I think a few players were in self-preservation mode and a few who are maybe unsure of their futures here.

“It was frustrating and the crowd got frustrated. We did score a goal that was onside I have been told by our analysts, which maybe changes the game and sparks it into life.

“The back three and goalkeeper took an awful lot of responsibility in the first half and did not get anywhere near enough help.

“I thought they were great, the ball was with them continuously because there was not enough energy and help. When we did get into the final third we gave it away far too cheaply.

“We had people looking to finish the season on a high, trying to force the killer pass and making decisions that might not have been taken had it not been the last game and had we felt mentally that there was really something riding on the game.”