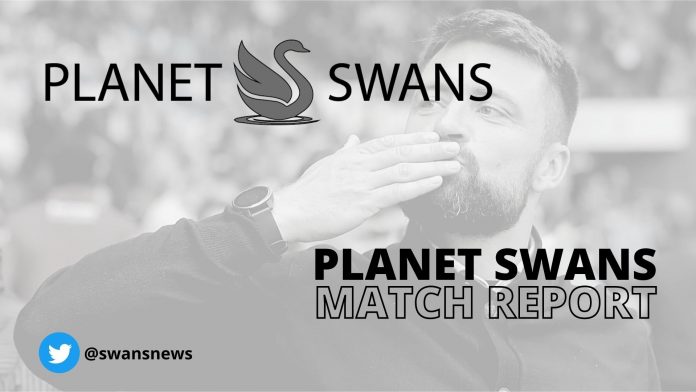 Not for the first time this season (but hopefully the last) the Swans were embarrassed and outfought in a heavy 5-1 defeat, this time at a rampant Nottingham Forest led by Steve Cooper.

Forest peppered Andy Fisher’s goal and the 5-1 scoreline in reality flatters Russell Martin’s timid team who yet again saw all their frailties exposed by a superior team (and perhaps manager’s ideas).

The fact it was against Cooper and Sam Surridge scored a hat-trick makes it all a bit more painful in a game that meant nothing in reality for the Swans except for end of season pride.

But more concerns have surfaced in recent weeks about the team after two three goal leads thrown away and now this latest mauling by Forest who have put nine goals past the Swans in the two fixtures this season.

Martin undoubtedly has to take more than a little responsibility for this loss with no genuine centre half in the squad – Joel Latibeaudiere is the closest – yet Finley Burns and Ryan Bennett nowhere to be seen.

It’s common knowledge that Bennett will be leaving for pastures new in the summer but the omission of Burns is puzzling at best, so with Ben Cabango out for the rest of the campaign it was left to a back three of Ryan Manning, Kyle Naughton and Latibeaudiere for today’s game. Cameron Congreve was also given his full debut.

Probably better to keep the detail to a minimum, the analysis could go on for days after this game. So many efforts from Forest at the Swans goal and little in the way of defiance or resistance except for some solid saves from Andy Fisher.

It didn’t take long for Forest to take the lead in bizarre fashion. More hesitancy at the back saw a cross misjudged by the back three and allowed Jack Colback to nip in to hit the ball towards goal where Christie was bizarrely lying on the goalline. The full back handled the ball and whilst it crossed the line, the referee awarded a penalty and a red card for Christie.

After a chat with the linesman, the red was changed to a yellow card and the goal was awarded. Confusing? Yes, but probably the best outcome for the Swans you’d have thought. It could have been eight otherwise…

With all the intensity and momentum with Forest the Swans were somehow handed a lifeline when Matt Grimes played a delightful ball over the top to Michael Obafemi who stepped inside his marker and slotted past Brice Samba. It came from nowhere but he did ae he and Piroe have been doing for much of this season and saving the Swans when it looked like they were out of the game.

Parity stayed until half time  despite a plethora of chances for Forest and precious little for Martin’s team. They couldn’t be handled on the break with Djed Spence making both Hannes Wolf and Manning look like they were playing in the wrong division.

Forest knew they needed to win to give themselves the opportunity to move to second place on Tuesday night when they visit Bournemouth and surely enough they came out with a point to prove and soon scored.

A corner was whipped in and the easiest of finishes was offered to former loanee Surridge who had a free header with no Swans defender offering a challenge and Obafemi’s work had yet again been undone.

Soon after it was three and this time, on the break, Surridge was found on the move just inside the penalty area on the left and he curled a delightful strike past a helpless Fisher and the Swans looked battered and bruised and praying for the final whistle.

Frighteningly the last four games has now seen eleven goals scored against in the second half, that’s in just 200 minutes roughly so an average of a goal every 18 minutes or so. The Forest debacle means that on average the Swans have conceded 1.5 goals per game throughout the season. Simply not good enough whatever progress is suggested as being made.

Surridge soon had his hat-trick as the Swansea defence again failed to react and matters were made even more humiliating when substitute Alex Mighten through sheer bravery managed to poke the ball past Fisher in what seemed a lost cause for 5-1.

Russell Martin said the game was embarrassing. He was right, but it’s not for the first time this season, for Forest read the Bournemouth games, the two Reading games, the two Stoke games, the two Fulham games, Forest at home, Preston away, Sheffield United away. The list goes on.

The blame can;t entirely lie with the boss after all those catastrophes but against a strong physical team like Forest not utilising the players on your books – whether their long term future lies here or not – is pretty unforgivable and it demonstrates a serious stubbornness.

Whether Bennett or Burns would have made a difference nobody knows, but I’d argue the point that this game would not have ended up with the sheer amount of chances in favour of the home team and a 5-1 scoreline if both had been brought in.

We also see no Nathanael Ogbeta; a genuine left back when Martin seems happy to shoehorn Wolf who is absolutely not a defender by trade as seen on days like this when Spence had the freedom of the Forest right side.

Too many questions and too few answers but for all the good will the good form brought a month or so ago, Martin has a big job on his hands over the summer to improve all over the pitch, but not least defensively.