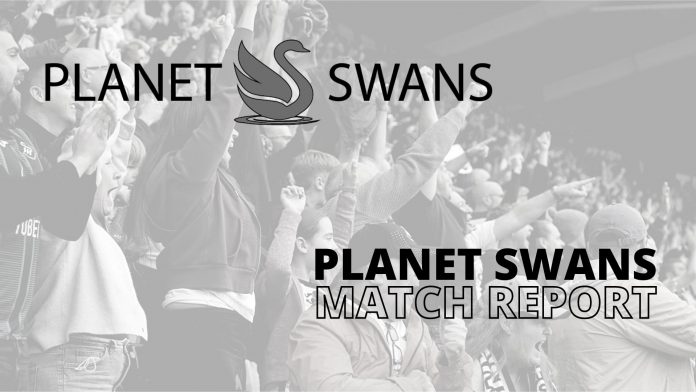 Swansea City were held to a 3-3 draw by Bournemouth tonight in a dramatic and rather controversial game which saw Joel Piroe score twice to help the Swans into a 3-0 lead.

Russell Martin’s team largely did their fans proud particularly in the first half where Piroe’s two goals against an all at see Cherries defence before Obafemi found Cyrus Christie on the break and he finished with aplomb after the interval.

It all looked rosy but for the second time in three games the Swans let a three goal lead slip when Kieffer Moore – off the bench – netted two and Dominic Solanke converted a penalty awarded after Ryan Manning’s rather preventable handball.

In a frantic finale, Moore netted a header from a corner to make it 3-1 before clearly elbowing Flynn Downes before Jefferson Lerma had a confrontation with a fan in the stand as he raced to collect the ball.

Then as Manning went to block a cross in the penalty area he blocked the ball with his arm and a spot kick was awarded which was promptly converted by Solanke before Moore netted on the rebound in a crushing end to the match.

Russell Martin kept faith with the same line-up that drew against Middlesbrough although surprisingly there was no Ryan Bennett or Finley Burns on the substitutes bench – something that would later prove to be pivotal as Cabango was forced off in the second half.

Again there was no Jamie Paterson so Wolf was on the left side but his absence didn’t affect the Swans as they stormed into an early lead.

The ball found Christie on the right hand side and his cross was blocked by Mark Travers in the Bournemouth goal with Obafemi waiting only to come out to Piroe 10 yards out who slammed home against the team battling to secure second place.

Swansea were on it at this point, pressing high up and chasing down their opponents who looked all at sea particularly defensively and the Cherries particularly couldn’t cope with the slight alteration of Piroe playing on the left of the front three rather than his normal place on the right.

That again paid dividends as Wolf won the ball down the left and found Obafemi who charged towards the box; he then played it to Piroe 20 yards out and his crisp left footed strike evaded Travers and found the bottom right hand corner for 2-0. Where had this come from?

Bournemouth always looked a threat in attack and Jamal Lowe was included in their line-up clearly with a point to prove against his former club although you wouldn’t say they had anything clear cut in the first half to trouble Andy Fisher.

Indeed it was probably the Swans who came closer to a third with Obafemi’s screamer from distance just going over the bar whilst Matt Grimes was unlucky as his effort from outside the box was deflected for a corner.

It had been a fantastic first half overall and one where the Swans had been clinical and Piroe added his 23rd and 24th goals for the season – you do tend to think that with every goal he scores he’s more likely to leave in the summer.

The game had started to become a bit nasty in terms of bookings with Bournemouth going for the rough approach in a bid to get back into the game although Martin’s team were always living on the edge by playing out from the back presenting the opposition with far too many attacks.

When dealing with a high press as the Cherries adopted, it is very difficult to still play out from the back and Martin made the uncharacteristic move of shouting to Fisher to play it longer to avoid conceding possession from the short goal kicks.

Half time arrived and there was always a sense that a tough second half lay ahead and Scott Parker made his point by sending his team out five minutes before the restart.

The lanky Philip Billing was brought on to add to the attacking impetus for the away team and the £15m man was quickly into the action down the left side for Bournemouth.

Although it was his team mate Jaidon Anthony who should have made it 2-1 when a cross found him unmarked at the back post with Christie napping at wing back although his effort was blocked by Fisher.  A bit of a let off.

Then, on the break, Wolf and Piroe combined to find Obafemi who in his trademark style was rushing towards the penalty area and with Christie seemingly finding another gear to sprint from the right side to slam home into the roof of the net to make it 3-0. It looked like the ball had just run too far from Obafemi’s pass but the finish was again clinical.

At that point the game surely looked to be over from a Bournemouth perspective and there was a period where their players seem to accept the defeat, although the introduction of a certain Welsh striker spurred them on. As did the clear goading by the Swans fans of said Welsh striker which seemed to inspire his performance.

They first pulled one back when some hesitant defending on the right saw a corner conceded which was promptly whipped in and headed in by Moore for 3-1. With more than 20 minutes to go and recent history fresh in the memory, alarm bells started ringing.

The pressure was incessant at this point with no out ball for the Swans and three small centre halves in Manning, Naughton and Latibeaudiere up against Solanke, Moore and Billing. No match.

The lack of Finley Burns or Ryan Bennett on the bench was bemusing, as was Martin’s hesitancy to make a further substitution until Jay Fulton came into the fold probably later than it should have been.

Promptly enough the second goal arrived and it was a handball from Manning in an attempt to block a right wing cross but the ball struck his hand as he was on his way down to the ground and it was a chance for Bournemouth to pull back to 3-2.

Solanke slotted the ball to the bottom left corner under the reach of Fisher and if it wasn’t game on before, it certainly was now.

Moments later Moore should have made it 3-3 as he was played behind a static defence but through the crowding out from the three centre backs and Fisher closing in his effort was blocked and away to safety.

With 10 minutes and a surely excruciatingly long stoppage time with all the timewasting the Swans had partaken in, it seemed practically inevitable there would be another Cherries goal; the question is whether it would be 3-3 or 3-4 to Bournemouth by full time.

Another defensive mix-up and no out ball (Obafemi and Christie were exhausted) saw a ball headed away when the sensible option was to nod back to Fisher and it was eventually worked out to the left where Jaidon Anthony whipped a wicked cross in which saw Solanke head towards goal.

The former Liverpool striker saw his header palmed away but into the danger zone where Moore was scrapping with Latibeaudiere to reach the rebound and the Wales striker won to make it 3-3 and incredible scenes from the away end and from the coaching staff on the sidelines for Bournemouth.

There was a question about a push on Downes which on replay looked fairly convincing but no cigar and there was still eight minutes of added time to come.

Luckily the Swans managed to see that out least for a point but it could have been so much more against a whinging, dirty Bournemouth team that left a bad taste on the game after some cynical behaviour on the pitch.

Refereeing decisions ultimately had a big impact on the contest and had Moore rightly seen red for his elbow there’s no doubt the outcome would have been a Swans win. But the cold light of day shows another 3 goal lead lost for the second time in 3 games and that’ll be real work for Martin in the close season.

Ultimately it mattered little. The Swans are mid-table, Bournemouth are probably still going up although it was an entertaining match overall and one that would have been a thriller for neutrals.

Julian Winter has said that the Swans key transfer priorities this summer are "two centre backs and a right wing back" as they continue...
Read more
7,892FansLike
14,143FollowersFollow