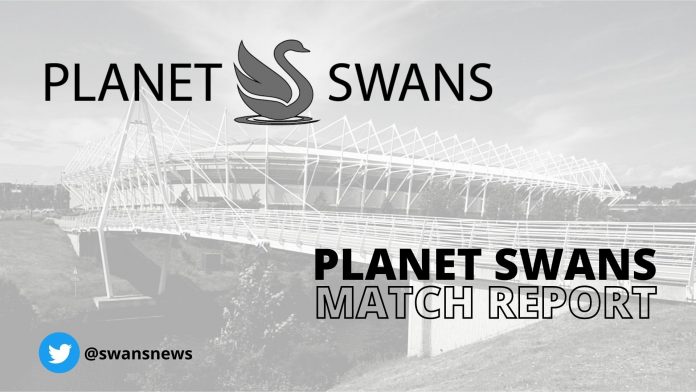 The Swans bounced back within a minute to draw 1-1 with play-off chasing Middlesbrough in an entertaining second half at the Swansea.com Stadium.

Riley McGree pounced on some casual goalkeeping and defending to slam home via the bar just after half time but Michael Obafemi continued his strong form by skipping past his marker and hitting into the far corner a minute later.

After a dull first half where chances were few and far between the game came alive after the interval with both sides hitting the woodwork and missing clear chances to win the game.

The result leaves Swansea 9 points off the play-offs with three to play whilst the draw severely dents Boro’s push for a top six finish.

Russell Martin surprised many by making just one change with Jamie Paterson – nursing a knock – dropping out for Ryan Manning amidst widespread hope that the last three matches would see some of the younger players introduced.

In a game where the Swans predictably dominated the ball it was Middlesbrough who had the few opportunities in the first half with the tall Jack Coburn causing the back three an issue.

He headed wide and Marcus Tavernier also skewed an effort off target as the Swans struggled to make inroads in an attacking sense.

It’s startling to hear that Martin’s team have conceded 58 goals (59 after today) this season earning them the sixth worst defensive record in the division and surely an avenue for desperate improvement over the summer window. Maybe a Harry Darling would help that issue?

The key will be whether the stars of this campaign such as Flynn Downes and Joel Piroe will be kept with the manager admitting this week that “1 or 2” would need to be sold on a regular basis.

Downes was again impressive in midfield although sometimes you’d wish the shackles would be taken off him in an attacking sense; same for his central midfield counterpart Matt Grimes.

Duncan Watmore had the only other real effort of the first half – aside from Ryan Manning’s deflected free kick – but when through on goal on the right fluffed his lines and the effort bounced to safety.

After the interval the game had the much needed spark it was crying out for when some hesitancy between Fisher and the defence presented the ball to Riley McGurk and the midfielder thrashed the ball in via a little help from the bar.

The away fans were almost celebrating again immediately after the restart when Ben Cabango was dispossessed by Watmore only for Tavernier to see his effort well blocked by Fisher before Obafemi struck for the hosts.

The dangerous frontman had already looked sharp with his runs on the ball and he was fed by Piroe, sidestepped Sol Bamba 18 yards out and then fired into the bottom corner leaving Luke Daniels with little chance.

That was the start of a mad 20 minutes with Obafemi close to finding Piroe for a Swansea second before Marc Bola’s delightful half volley hitting the crossbar with Fisher stranded.

It was then the turn of Swansea to hit the woodwork with Cyrus Christie delivering a delightful cross for a free Hannes Wolf inside the box but the off-colour Austrian smacked the ball against the crossbar – he really should have scored.

Piroe then saw a strike from a well worked corner tipped away by Daniels before a mad minute saw deflections and rebounds galore in the Swans box with Andraz Sporar eventually the man denied as a second goal looked inevitable.

The final two chances came with one apiece for either side, first Cabango heading wide from a well worked free kick when unmarked and then substitute Aaron Connolly pounced on a poor Christie touch to run away towards goal.

Fisher was beaten by his low strike but it bounced off the post as the ‘Boro fans looked ready to celebrate.

A point that helps neither side in terms of the table but the second half provided great entertainment in a game which either side probably could have won.

A 59th goal conceded and a point on the table to see the Swans in 14th with three games to go in a mixed first season under Russell Martin. It is also eight games unbeaten which is a sure positive ahead of the summer.

A summer where there’ll surely be lots of activity for our scouting team to… oh wait never mind.